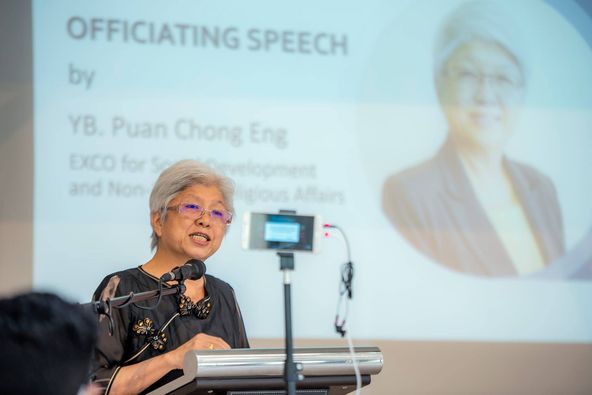 The Women and Family Development Committee (JPWK) was established in January 2019 by the state government and comprises of 15 all-women committee members in each of the 40 state constituencies in Penang, adding up to 600 women grassroots leaders in the communities.

Unique for being the first of its kind in Penang and the nation, JPWK mainly functions to plan and execute programmes that increase awareness and empower women and families in the local community, identify potential female talent, and serve as a platform for women to work together, share experiences, and support each other. Under the purview of the Exco for Women and Family Development, the committee is monitored and evaluated by PWDC, who is also in charge of its capacity building.

Following the success of the smaller scale “Projek Kuih Raya”, JPWK and PWDC launched the “Wanita Jana Rezeki” programme to enable B40 women to generate their own income. The programme offers grants of RM1,000 to chosen female small business owners which can be used to expand or improve their businesses.

To extend support and enhance the livelihoods of single mothers during the ongoing pandemic, PWDC has also initiated the ‘#SokongBizIbuTunggal’ programme. “Our main aim is to help single mothers to generate income through their cooking skills. We want them not to only sustain but thrive financially during this challenging time,” said Sungai Pinang assemblyman Lim Siew Khim, who is the programme adviser. While mainly targeted at single mothers, the programme is also open to women whose spouses are ill or are affected economically due to the pandemic.

The state’s Penang Women Entrepreneurs’ Mentoring Programme (PWEMP) is another step taken towards its target of seeing 40% female ownership of small and medium enterprises. Of the 138 women who participated in this programme, 105 have followed it perfectly for six months. According to the Exco for Women and Family Development Chong Eng, “The average random income per mentee in October 2020 was RM1,923. The amount decreased slightly in December to RM1,717. In February 2021, it increased to RM1,821, and in April, it went up further to RM3,860. This data proves the effectiveness of the programme, showing an increase in average income of approximately 50% within half a year.”

Under the programme, entrepreneurs or aspiring entrepreneurs do not have to fork up money to pay for relatively expensive training courses offered in the market. The five-month programme costs only RM100 for mentees from the B40 group and RM600 for those in the M40 and T20 groups, and is led by strategic partners who are willing to share their knowledge and expertise to increase the number of women entrepreneurs in Penang.

In conjunction with International Women’s Day, participants of the PWEMP jointly launched Penang’s first women entrepreneur pop-up e-mall (Pwemall) which consists of eight business categories such as food and beverages, fashion, clothing and accessories as well as health and beauty. It already boasts a total of 60 stores and is put together by mentees, mentors, and strategic partners.

Are Our Youth Equipped for the Future?
Gender Inclusiveness Policy 2019 [BM]
No One Goes Hungry - Help Pours in For Those In Need
WCC Annual Review 2019
Page load link
Go to Top