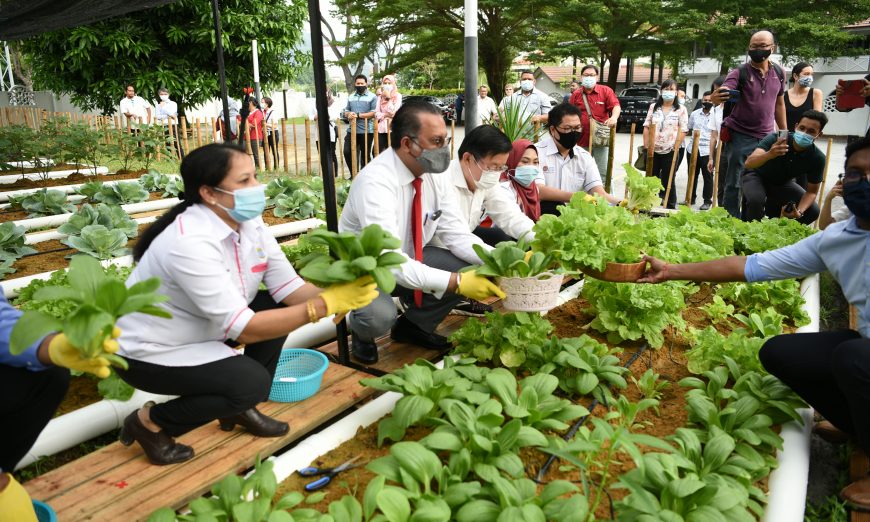 The UN projects that by 2050, about 75% of the world population will live in cities; and 90% of this increase will take place in Africa and Asia. Presently, 75% of Malaysia’s population reside in urban areas.
For rural youths, migrating to cities provides them with better education and employment opportunities. But this urban population boom at the same time also increases reliance on rural and peri-urban areas – where most agricultural activities are concentrated – to meet rising food demands. This is unsustainable in the long term; we have seen just how easily and swiftly Covid-19 disrupted the urban food supply chain during instances of panic-buying. Unless quick and concrete action is taken, cities risk succumbing to a similar crisis in the future.

Therefore, it is timely that the “Malaysian Urban Agriculture Movement” was launched from Penang by Think City last September. The pilot project Kebun Kita(R) was initiated on the grounds of the Penang Digital Library. It is creatively named using a combination of the Malay words “kebun” meaning “farm”, with a tongue-in-cheek twist on the words “kita” and “kitar”, meaning “ours” and “recycle” to reflect the closed-loop, zero-waste nature of the farm. Through the programme, 60% of the harvested produce will be channeled to the state’s B40 community, while the remainder is to be sold to the public to cover the farm’s operational costs. The farm will also serve as an educational hub for communities to learn about the latest technologies, prototypes and pilot ideas in urban farming.

Convinced of the benefits of the Kebun Kita(R) model, chief minister Chow Kon Yeow announced ambitious plans to establish 100 more urban farms in Penang within the next five years. More land parcels are to be earmarked by Chief Minister Incorporated, and discussions are currently under way to set up two more farms in the state, including one on the mainland.

“Food waste is one of the biggest climate change contributors. Those that are disposed of at landfills release greenhouse gases that are detrimental to the environment,” says Karthigayan. “Instead, the EFWC – using microorganisms – converts food waste with a maximum capacity of 50kg into compost in just four days. This allows nutrients in the food waste to be retained during the process before it is used in raised bed farming to support the growth of crops,” he explains.

On the other hand, the vertical aquaponics system is used to channel nutrient-rich fish tank wastewater to irrigate crops in the towers. The crops function as water filters enabling clean water to be reintroduced into the fish tanks which, compared to conventional farming methods, can recycle up to 90% of water.

Embedded sensors to detect temperature and humidity are also used to enhance the farming process. “For example, the raised bed irrigation system only gets activated when the moisture level drops below a certain level; this system is more water-saving than timer-based automated farms. It can be remotely monitored and operated via specific apps on any smart device; participants would not have to be physical present to manage the farm,” he adds.

Kebun Kita(R) is open for public participation, and Penangites can obtain first-hand experience in operating and managing an urban smart farm under the guidance of a manager with bio-technical knowledge. In order to empower youths from B40 families, Think City, alongside local experts, is also currently engaging with the US State Department to conduct a smart agro-preneur programme in collaboration with experts from the University of the District of Columbia.

“I sincerely hope the success of Kebun Kita(R) will become an inspiration for individuals, families and neighbourhoods to initiate their own urban farms,” says Karthigayan. “After all, it is not only about establishing a sustainable food source, but more importantly, it is to build social cohesion and resilience for everyone to come together and network.”