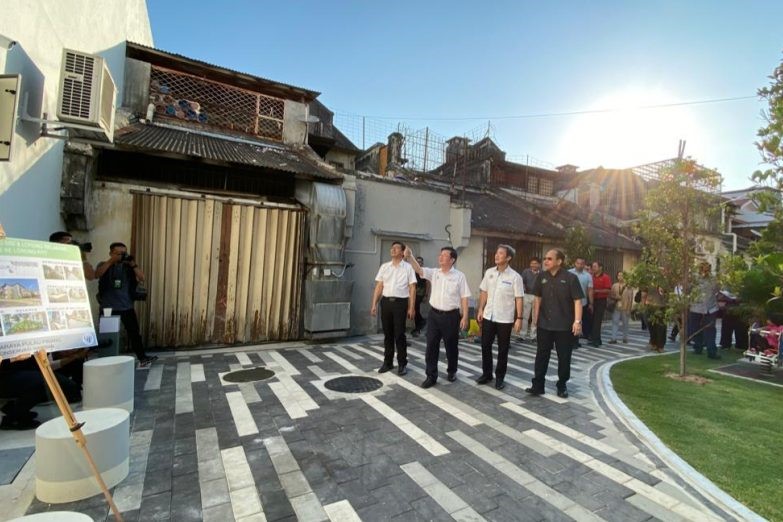 Malaysian housing back lanes are frequently overlooked because of its hidden nature. Back lanes were unfavourable to most people because of the narrow roads between rows of buildings, a utility route for sewerage, drainage, and garbage collection. Due to its hidden nature, it attracts activities such as minor theft and drug addicts who frequent the area.

In a commercial area, the restaurant kitchens spill onto the tarred road, making the back lane stinky, dull, and filthy. Workers washed plates and pots, and dumped food scraps down the drain. Vans and lorries blocked the back lane as they unloaded goods for the shops and restaurants.

Recognising the critical need to upgrade space to develop more practical socio-space functions, the Penang Island City Council (MBPP) began revitalisation and upgrading projects in 2017. The project aims to bring life to the underutilised back lane by converting it into a landscaped pedestrian walkway with lights, street furniture, and trees for shade.

Several alleyways and back lanes in the city have received much-needed upgrades with better visibility and basic facilities that attracted the public. Among them are the lane that connected Lebuh Carnavon until Jalan Pintai Tali, Lorong Stewart, Lebuh Pantai, and Lebuh Victoria, four back lanes behind Lebuh Armenian, Jalan Masjid Kapitan Keling and Kampung Malabar.

These makeovers serve as outdoor galleries, enhancing the visitors’ experience of strolling through the city. No longer a walk of shame, these lanes are now alternative access routes for the public with recreational space and greenery in the city that create a sense of safety, cleanliness, and well-being so that it can be used at all times.

The back lane transformation project has come to fruition when the Penang Island City Council (MBPP) received the prestigious Jean-Paul L’Allier Heritage Prize from the Organisation of World Heritage Cities (OWHC) in Quebec on September 9, 2022 for its achievements in creating public spaces through the revitalisation of back lanes in the World Heritage City of George Town.

MBPP mayor Datuk Yew Tung Seang said the award surprised him because there are over 300 heritage cities worldwide, with George Town being one of the 11 cities shortlisted. He continues, “MBPP aims to transform and beautify a total of 9km of back lanes and side lanes. We have so far reached the halfway stage”.

When the 9km of back lanes are upgraded, MBPP will have approximately 10 acres of green space, including cycling lanes. The said initiative of upgrading and beautifying back lanes by the MBPP has transformed the previously neglected area. The back lane is no longer a waste of space, with safer and healthier spatial spaces for urban dwellers for sustainable living complementary to tourism and critical assets for Penang’s economic development.